In the village of Lyminge in Kent is a rare Archaeological site which has been excavated by a team from Reading University over several summers in recent years.

I was lucky to be connected as self initiated Artist in Residence with this project,

initially I was interested by the work of the Environmental team but also became intrigued by the Anglo Saxon glass sherd assemblage unearthed at the site. 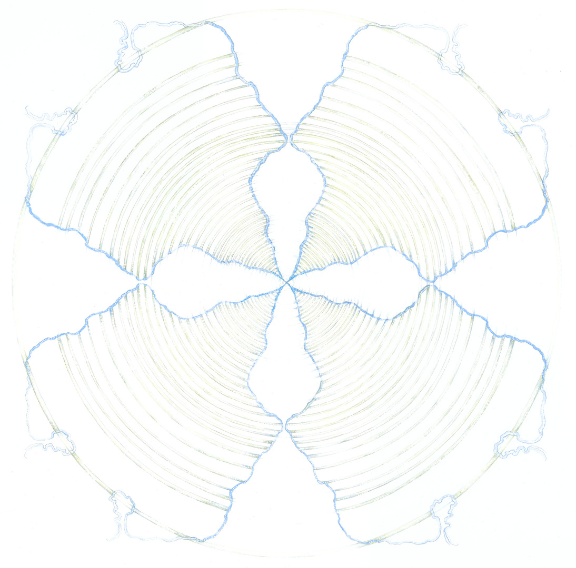 This drawing shows the intermittent course of the river Nailbourne from its beginning and the spring at Lyminge down to the sea.

The concentric circles were inspired by the glass trails found on Anglo Saxon cone beakers and from the extensive glass fragment assemblage and grave goods excavated at Lyminge.

There are 43 circles, each one representing one generation, so reflecting the time between now and the 5th century AD.

I have become interested formally in the Anglo Saxon glass but also in how these glass fragments seem to represent lost narratives.

The patterns made by the reflected watercourse hints at the intricate designs on excavated metalwork and the cross pattern references the importance of the monastic and royal settlements discovered at Lyminge.

A drawing inspired by the excavation trench dug near the spring of the river Nailbourne by the Environmental team.

Anglo Saxon willow stakes, wattles and other preserved wood from wood workings were excavated along with pottery, plant remains and shells. 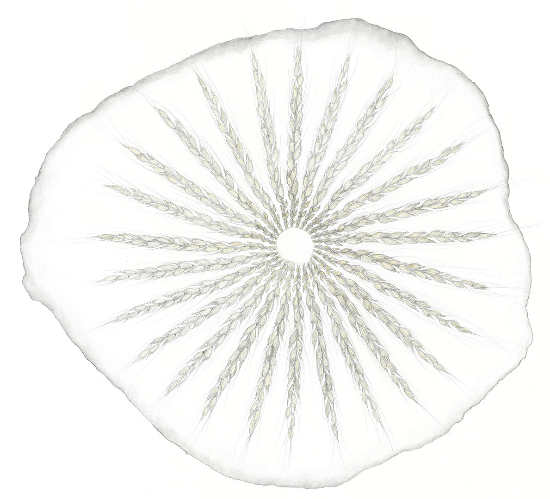 'the sun, the spelt and the stone'

A graphite and coloured pencil drawing on paper.

The outline in the drawing is a tracing around an Anglo Saxon quernstone from the Canterbury Archaeological Trusts collection.